It seems I caused some degree of consternation on Monday by mentioning shopping for prom gowns when I was postpartum. Allow me to clearly state for the record that I was NOT going to the prom at that time. I had my first baby when I was 22, so I was well past prom age.
I had been on bed rest due to preeclampsia for 5 weeks before having Diana. In the dead of winter I had her by emergency c-sec after two days of labor. Given that I had listened to every muscle in my body atrophy for 5 weeks prior to that marathon I was fairly wrung out by it all. Apparently I healed quickly because at the 6 week postpartum checkup the doctor declared me in perfect health. I asked him why I still felt like a dishrag.
I had gone quite stir crazy between bed rest and trying to recover from the c-sec in the middle of winter. The first week home my mother took me to the mall so I could just get a change of venue. I shuffled along clutching my sore belly while she pushed the stroller. After about 20 minutes I was exhausted and we went home. Too much too soon.
After the 6 week check I was talking to my dear friend I wrote about in 'Tumors, Pork chops, and Blueberry Buckle.' She had shared with me the slightly wacky tradition she had of dressing up for the Miss America Pageant and throwing a party. At 6 months into my pregnancy I put on an old prom gown with an empire waist, fashioned a sash out of toilet paper (Miss Abdomen, winner in the stretch mark and mood swing categories), and wore a pair of plastic baby pants on my head as a crown when I joined her party. As I was bemoaning how exhausted I felt all the time and how I didn't even recognize my own body anymore, nor could I even begin to squeeze it into any familiar clothing she suggested we go shopping.
Off we went to the mall. I tried on some things that I hated and moaned some more about not being able to fit into anything I liked. Then we spied the prom gowns and she got a twinkle in her eye and dragged me off. I caught her drift quickly and we each loaded our arms up with the most outrageous styles we could find and spent the next half hour laughing like crazy at each other as we crammed our flabby selves into slinky gowns. When the sales lady looked askance at us I assured her my mother had agreed to watch the baby so I could attend prom.

Now as a segue allow me to present a very special accessory I made all by myself....
The fabulously crafty Susie sent me a bra some time ago so I could fashion it into a purse. It has taken me several months to get around to it but at long last I have completed the project. It seems the perfect accessory after my postpartum prom gown shopping no? 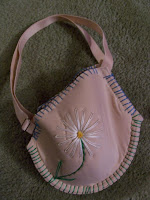 Diana: It's like the Depression. She's so poor she has to make a purse out of some old bra...Only...it's the Depression so she doesn't even have money to carry. So why does she even need a purse. It's just stupid.

Calypso: Mom, that is so weird and gross. Can I use it for church on Sunday?

My mother: You're not actually going to let her take it to church are you?

Whether in this life, or it's former life, that purse has held some very valuable items.....
Hehehehe....xoxox
Great story

Susie:OMG that THING actually fit me at one time? It's monstrous!

LOL I totally forgot about the bra...thats hilarious, Lime....

Ok now I remember the details of the postpartum prom gown.....

A bra made into a purse, huh?

So I guess the women with the biggest purses have bragging rights? :)

You have made my day! I'm cracking up at your comment to the sales clerk. Hilarious!

You are a genious for fashioning that bra into a purse. You should put a patent on it because it's going to catch on.

I can see where your girls got their sense of humor.

You know that's something that would make a great blog pass around to have everyone's picture taken with it. I'm thinking the g-man could pull it off with a smile.

I wonder what one could make with a jock strap?

So if I send you a pair of my old tightie whities...?

what a great story!

LMAO!! that is a 'fabulous tale of woes'!

Horray for the new accessory! That is how you get the best out of waste. You must start a recycling unit!

Seems like every time I glance away for a second you're a posting fool. Fun reading!

Damn! That is great. I love the purse...and the whole story. You are such a fun gal!

I have some tiedye fabric for you to fashion into something, but I (AGAIN) can't find your real addy...sorry. I suck so much.

Funny story about the prom dress and the bra purse looks cool.
tc

Hey Lime,
Lets sell it on Etsy...you can have all the money we are going to fetch for it.
That is, if you can part with the lovely gem. You know it looks pink in the pictiure but I know its beige. Sigh....
Maybe we can get 10 bucks for it!
Hah!

I think you should do a demo on your blog how to make it. And darn it, too bad I didnt think of it sooner. Etsy is having a contest for an instructional video how to make an artsy item..this would have been perfect but deadline is past...prize is a sewing machine ack!

Can you make me a pretty underwire lacy one? Perhaps it will give a much needed "lift" to my funds...

Lime lime!!! Susie has promised to send me her bras too!
I am going to make men's caps with them!! isnt that what shud rule their mind?

ooooo...I want to borrow the purse too. Maybe not for church but how about for the wedding I'm in. It would look smashing with my bridesmaid dress :)

sorry for making you blubber earlier... but you did get fair warning.

I love the brurse!! Too cute!!

I too just transformed a bra last weekend. Mine still holds the girls though!