Weird Side of Gettysburg 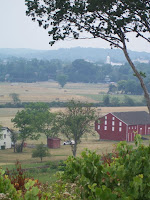 On Tuesday the Lime Family took a day trip to Gettysburg. We decided to do the deal where you buy a cassette or CD and follow the map and the recording through the park. It was the first time the darling Limelets had the opportunity to experience the grand history that is Gettysburg. It was as exciting and moving and educational as you would expect such an important site to be, but knowing us you also have to expect some weirdness....Come along for our field trip, won't you?
Nothing weird in this shot. It's just an example of what I find so beautiful about my state, the rolling farmlands. Gettysburg is surrounded by scenes like this. So many of the battlefields were basically on farmland.

Here's something else distinctive in Pennsylvania, a group of Amish or Mennonite folks. I can 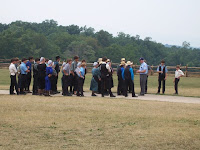 identify which of those two sects by the buggies they drive. Unfortunately, this was weirdness #1, they came in on an air conditioned tour bus so I can't tell you if the are Amish or Mennonite. They arrived at the Eternal Light Peace Memorial as we were leaving it.
Another person we met at that site was an Irish fellow who participates in US civil War re-enactments in the UK. That quite honestly astonished me and also qualifies as weirdness in my book (although a nice kind). I am so accustomed to Europeans who find the American sense of history laughable since we can't go back 1000 years in recorded time. It was really touching to hear about this fellow's exploits as re-enactor and witness his thrill at being able to come see these sites with his own eyes after having studied them from afar for so long. 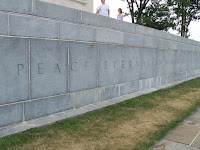 Memorial. It reads "Peace Eternal in a Nation United." It was dedicated by President Franklin D. Roosevelt 75 years after the end of the war. It was kind of amazing to think that 1800 veterans from both sides of the conflict attended the dedication just a short time before we entered WW2. 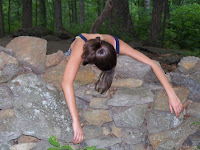 There are lots of low stone walls all over the battlefields. One thing Pennsylvania is noted for besides rolling farmlands is rocky soil. All those nice ice age glaciers blessed us with what Pennsylvania farmers refer to as our most prolific crop...rocks. Here we see one of the casualties of a 95 degree July day in Gettysburg slumped over a battlefield stone wall near the 20th Maine memorial. Just imagine marching or fighting in that kind of heat in a wool uniform, which is what the soldiers did since the battle took place July 1-3, 1863. Come on, kiddo, you can walk around a little while longer.

Here we have a 5 second re-enactment of Pickett's Charge by Mr. Lime and Isaac. Please disregard they are running the wrong way so it would more likely be a retreat than a charge (picky lot aren't you?), have no weapons, and there are only two of them. Isn't revisionist history wonderfully fun? 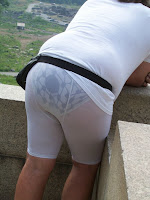 Of all the minor weirdness we saw at Gettysburg, nothing quite compared to this sight we witnessed at Little Round Top where Brig. General Meade defended the Union position. I dunno, I guess you'd call it Big Round Bottom, but I personally find it in defensible. As I was writing this post I thought of how wonderfully informative RennyBA is in his posts about Norway. I thought, gee it would be nice to do a post of that caliber. Then I realized it was Wednesday, which requires weirdness, and saw this guy in his very special underpants and thought of Simply Me and her fascination with BTExpress's behind and combined information with weirdness and derrieres. See what the heat does to my blogging process?....Warps it terribly! Hope you enjoyed the tour.
Posted by lime at 12:09 AM

Oh, I enjoyed that very much, although I admit that the last "big sight" looks a bit weird. I have never been to Gettysburg, but have seen the Little Bighorn Battlefield in Montana, and it was a special experience.

and I loved the re-enactment by Mr. Lime and Isaac. For those 4 seconds I felt like I was REALLY there.

OMG! I loved your Tour de Underpants! What in the world??

And your laugh.. loved it and played it twice so I could hear it again. Nothing makes me happier than grins on faces and real laughter :)

Thanks for sharing details of the family trip! Looks like you guys are having a fun yet educational summer (-:

We have Amish in this area as well. I remember visiting a town full of shops run by the Amish. There was an older gentleman on his buggy talking on the cell phone. Amusing!

I was happily enjoying the tour until we got to Big Round Bottom . . . very disturbing image. I may not eat for the rest of the week.

Gettysburg to me is hallowed soil..
It is where the Union was preserved..When you are standing on "The Cornfield" where Pickett's Charge actually took place, you can hear the screams of the young Confederate soldiers laying wounded in the hot July sun, moaning for their Mother's help and dying alone...
That place is very emotional indeed...
And you have given us a small taste of how awesome that place is, I highly recommend it to any family...
Thanks Trini, I loved your Mini-Tour!! xox

What an awesome trip and weirdness for sure!!

You so funny!
I cannot believe that person wore those legging things with those undies.....just..I am in shcok.

We expected nothing less than Limes Weird tour of Gettysburg, and I am still looking for something wierd in the first picture....I know how you are....

So it was a great tour with a happy ending?! :)

Lime, the pics were cool!

Shit! where'd you get that picture of me!

First off, no guy should wear white tight spandex shorts, gay or not. Second....they make white undies for that reason.

Who wears white pants with funky underwear underneath?!? That is a crime! I did the Gettysburg thing back when I was nine, it was a lot of fun.

Thanks for the tour lime.
It's a sad time in this nation's history which we don't visit enough in our memories.
I have to disagree with my good friend g-man about the Union being preserved.
I think in the long term whoever won the war would've United the country and we have to remember this war was not about slavery but economics. Freeing the slaves was an afterthought. At least that's what I've learned.
I also think it's a shame they want to tear down the confederate flag as a symbol of racism. Many good men died defending the flag and the flag was not about slavery.
It's part of History folks.
tc
oh lime I believe that sect is called the Mennomish.:)
I am open to any historical correction of the facts if these are wrong.:)

American Civil War re-enacment in the UK is really big. I had a friend of a friend who did it (he was a Union soldier). Most of them have massive Charlie Pride and Dolly Parton album collections and tend to get up and shout " Yee - haw" when the hear a fiddle solo.

Fun trip for sure! That guy with the underpants is beyond weird though, downright insane! o_O

So, what souvenirs did you buy... if any?

BTW... feel free to subscribe/friend me on YouTube http://youtube.com/dathang ... perhaps it will pressure/inspire my output of videos then.

You're correct, thisis weird... I'm not in Kansas anymore.

Great post, Lime. You are a brave woman, to stand and laugh in the face of attackers, and especially to have faced that, that, Thing to photograph it. You once again bring us smiles.

This post reminds me that I had bubble print underwear on yesterday and almost wore white pants. Glad I caught myself and you weren't around with a camera.

I'm not at all the resident expert in Amish vs Mennonites, so don't quote me on that. I'd hate for you to go on national television and say "Mr. Zombieslayer said..." and it would be all wrong, and I'd be the laughingstock of the blogger community. That would do some serious damage to my cred, ya know what I'm sayin'?

Anyways, I need to go visit some Civil War sites. Got a bloody degree in History, and I've only watched reinactments. I don't think Mr. Lime's and Isaac's were quite up to par to the ones I watched. No offense to either of them, of course. Got to give them props for trying.

What a wonderful and educating tour Lime and thanks for taking us with! I think the idea idea of using a CD to follow the map and recording is great as you get a lot of detailed information!

To look through Gettysburg through your eyes was hilariously wired - I like your style - the best tourist guide one can ever have!

The vid was kind of scaring - thought they would knock you don't in the end:-)

How could you think of me while writing this post - did the guy with that cute bum had stilettos? LoL Thanks for plugging me anyaway!

I live just a half hour west of Gettysburg! been there several times. Each time I find something new! Great place.

It is always fun to see you and your family having a good time. I must say though that last picture was quite cruel because I think I might have nightmares now LOL

Have a great weekend!

Ahh...now you're getting closer to my old stomping grounds...you want weirdness? Travel up 11/15 and ride in to the back hills of Duncannon or Port Trevorton....

This made me sooooo intrigued and green with envy and I also had to laugh really, really hard and then I threw up. Well? What did you expect?

(especially enjoyed that picture that gave me the idea for a new commemorative drink: Dead Soldier----on the rocks.)

Nice to see a piece of your world :) Although I could have done without the gent in the bike pants :S