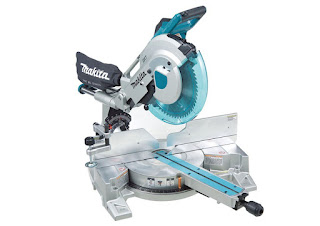 Many years ago Mr. Lime purchased a Makita 12" sliding compound miter saw similar to the one above.  When he brought it home and unloaded it he caressed it lovingly, cooed at it, and declared it better than sex.  I arched a single eyebrow at him as I responded, "If it's dangerous teeth you want, all you have to do is ask."  He was disinclined to accept my offer.

Today, I worked with him to help build a large deck around a pool.  It's the first time in the many years he has owned this thing that I was allowed to use it.  It was groovy and I liked being able to cut through a pressure treated 4x4 like warm butter but I'd like to state unequivocally and quite emphatically, it was NOT better than sex.  However, sitting on a board while he cut it with a circular saw was mildly arousing.
Posted by lime at 9:45 PM

Labels: i'll stick to other mechanical devices for the sake of pleasure, mr. lime, tools

I mean, when I read in the Bible that 'in Heaven, they neither marry, nor are given in marriage', my first thought is, "and that's better than what I have now exactly HOW?"

Makita..brings back memories of my construction days...

on the other hand, something that takes a couple D batteries might be cheaper, ya know??

Well, I'm partial to my DW750 DeWalt 12" Compound Miter saw, but I'm with you on this one- no way is it better than sex.

Oooo! Michelle, that was very suggestive - but funny! - Dave

Damn you lime. I spewed tea all over the place! I want one of those, but I have no place to keep it unfortunately. Nor do I know what I'd do with it. I just have a thing for power tools.

Well, see, whenever I hear "Makita", I think of Stan Mikita, who played for the Chicago Blackhawks, and that makes me think of his donut shop, so I go buy some donuts and eat them, which leaves me feeling bloated and greasy until I take a poop a day later and... Ooh, look, a squirrel!

Michelle, I have some "wood" you can sit on for me -- and no one will be endangered by sharp teeth on rotating blades! Wet spots could be a problem, however...

My husband has that saw and I have no desire to use it. I'll keep my hot glue gun, screwdriver and hammer.

Why does everything in a toolbox sound dirty?

Some of us wish we could have sex with someone who could actually use a miter saw...oh well.

I have a very similar mitre saw that I love using. Definitely not better than sex, but it is a handy tool.

Hehehe. I love power tools. It is a nice power kick.
Better than sex, though? Me thinks not.

Now that's a hoot. You never fail to amuse.

Guess this gave rise to the phrase 'all power to your elbow'?!
Congrats on the POTW. ♥

I just found your blog thanks to Smitten Image and I think it's great. After reading your post "More Power" I have the urge to go saw something. You are a gifted writer with a fine wit and I know I'll be back for more. I hope you'll visit me sometime at Chubby Chatterbox where I write about Art, Humor and Nostalgia. I think we might have a lot in common. If you visit, I hope you'll take a moment to press the Join button and I'll return the compliment. Take care.

LOL! congrats on your POTW!!!

A deck around the pool? Yes, indeed, it's time I come visit.

Set aside a board for me to sit on.