Last May I joined a yoga teacher training program.  I had only been practicing yoga for about a year and a half at that point.  There were, and still are, many poses which I was unable to do at all.  Part of me thought I had no business thinking I could be a teacher.  Fortunately, my studio is full of teachers who believe in empowering their students and who are faithful to impart the idea that yoga is not a destination in which both feet are behind your ears, rather it's a journey which, though partially physical, is largely between the ears.  As the Yoga Sutras tell us, the purpose of yoga is to calm the fluctuations of the mind, to quiet the chatter, to embrace stillness.  All our movement and sweat and physical effort is really to tame the mind and prepare us to physically endure meditation long enough to find the stillness.

Still I had doubts.  I was blessed to have people I respected tell me that I definitely had something to offer in this realm.  I had little comments here and there from fellow students which made me dare.  I had a therapist who, after three years of sitting quietly and neutrally when I expressed various things, blurted out emphatically, "I don't think there is any question that you should do this."  I asked where the carefully neutral therapist went and why she would so strongly advocate for this particular path.  She said it was a no-brainer because yoga had proven enormously beneficial to me physically and emotionally and when I expressed the possibility of joining the teacher training program it was the first time in three years I had said I was going to make a major investment of time and money in something just for me.  She had a point.

Thus, I plunked down my deposit on the last day they would be accepted.  I bought a dozen books.  I rolled up my mat and prepared for my first weekend of two ten hour days back to back spent listening to lectures, engaging in a physical practice and, cramming my brain full of anatomy, philosophy, and the names of ten other women, only a couple of whom I knew.

It would be fair to say our group of eleven ended that first weekend wondering just exactly what the hell we had gotten ourselves into.  And already personalities were emerging.  We had the shy, the sassy, the seasoned, the serene, and the silly.  Our age range spans four decades. Our cultures are diverse.  Most of us were fairly local but a couple came from considerable distance.

Over the months there were some major life transitions experienced by members of our group.  One made a move of over a hundred miles right at the time when we needed to begin teaching community classes.  She had to scramble to find a new studio in which to practice and which would provide space for that aspect of her training.  One broke an engagement.  One culminated hers in marriage.  One had a husband and child move to a different state in order to separate her child from a very destructive situation.  One buried an only child.  When one member rejoiced or mourned the entire group stood with her.

As the months passed and trust grew, histories were revealed.  Wounds were exposed, sometimes for the first time. Stories one might never have expected bubbled to the surface.  Sometimes they filled gently and floated aloft like a balloon as the person holding the history realized she could let go, that it no longer had power over her.  Sometimes the stories erupted like lava from the belly of the earth. When the mountain trembled and a woman feared it might destroy her there was a circle of support to provide safety.

Our group of eleven went from being acquaintances to being sisters. We shared laughter, tears, joy, frustration, exhaustion, delight, wonder, anger, discovery, insight, and boredom.  In the last weeks we all wondered how we might do on our final exam.  We spent one study session not so much studying as reminiscing over the last ten months, quelling anxiety, and laughing our asses off.  This past Saturday we took our exam.

Sunday morning we received the news that we had all passed with A's. Sunday afternoon we gathered for a simple graduation ceremony in which our head teacher spoke to each of us about what she respected and appreciated most in each of us.  She then handed us a small lit candle and our diploma.  During the party immediately following, the student who is an Indian woman presented each of us with a saree she had chosen especially for us.  She said, "We read the Yoga Sutras for our training.  Sutra means thread.  These sarees represent the beautiful threads of our friendships.  When you look at them remember how much I love you and all the love we have shared and will continue to share no matter where life carries us."

And then we shed a few more tears and hugs and laughter as she wrapped us up in her love just before we prepare to go out and share our light. 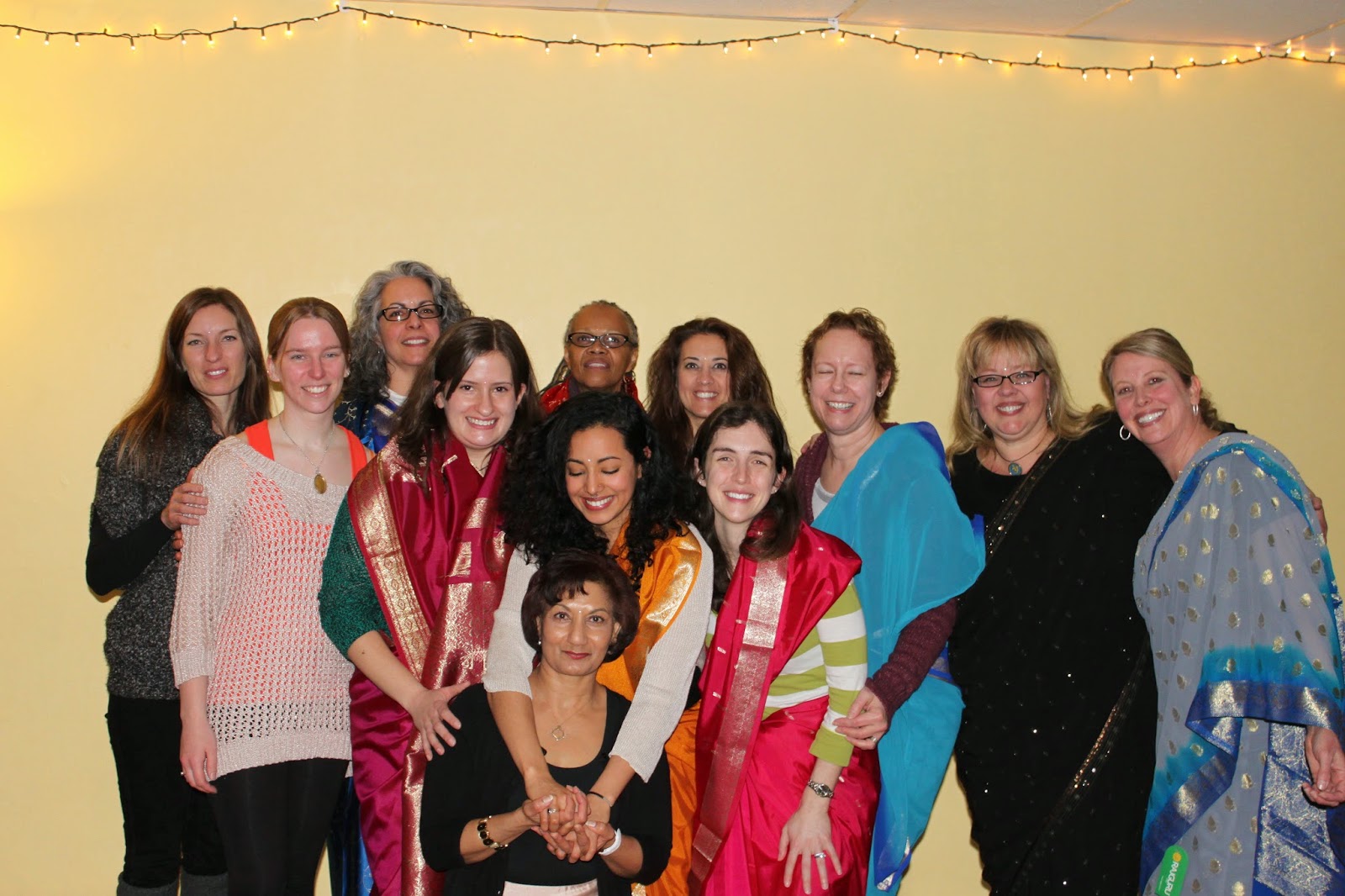 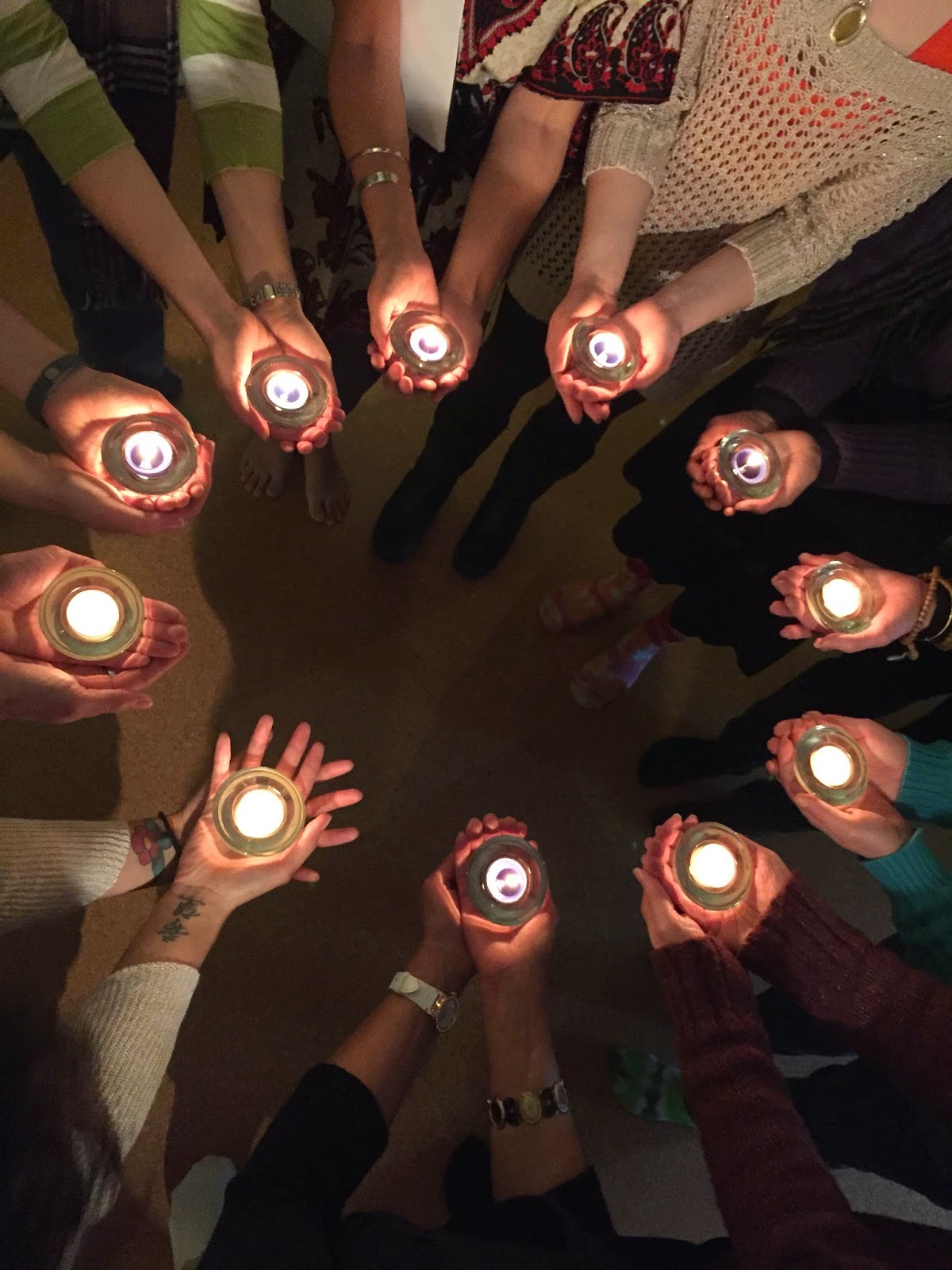 Congratulations on passing, and also for making such good friends.

Our connections to other people are precious, indeed. . .

How I love this. I am so happy for you. Congrats on passing, of course but mostly for being the kind of person who connects with other fine souls. You're going to be a fine instructor.

So glad that you were successful in this venture. It sounds as though you now have a sense of energy for moving forward on life's challenges. I hope some of you keep in touch. To bad that one gal had her eyes closed!

Congratualtions! Good for you on completing the program and embarking on this new journey.

(not necessarily your) Uncle Skip, said...

Sometimes I envy women and their sisterhood thing. No matter the group, this kind of thing seems to happen ... although not as intensely as in a rigorous group such as yours.

That is a very lovely story. Knowing you as I do - your penchant for making whatever scene you're in happier via the gift of laughter, as well as not suffering fools gladly - I have no doubt it is a very delightful group.

Fantastic!!! What an amazing experience. I am so happy for you. Congratulations!!!

what a wonderful read this was for me this morning .. i apologize for not visiting in like forever but my job move and a promotion has eaten into my blog reading time .. nevertheless .. congrats on your graduation AND congrats on a POTW!

So, so happy for you, and thrilled— you wanted it, stuck with it, accomplished it so beautifully, and succeeded so completely.

Sounds like an amazing experience I'm trying to imagine how this would've gone with me and ten other guys.

Congrats on the POTW.

And as someone who is still waiting to grow up, I like your tag line.

Our connections to other people are precious, indeed. . .