I haven't posted in well over a year, in blog years that's a small eternity.  About a month ago, Susie asked me to come back.  Life has been a little bit of a wild ride since then, 99% good stuff but it's kept me hopping.  Then I got a call from my old pal Lecram Sinun saying he was going to be traveling across the continent to my coast and asking if I might have some time to get together.  You're damn right I would have some time!

First Jimmy and Janita met for drinks at a local jazz club. They have an 11 year history and Janita was glad to meet her good pal Jimmy who cheered her on  and even named her when she was first born.  Eleven years, how the hell is that even possible?  Lecram's comment about meeting bloggy buddies is each one comes across as themselves on their blogs and then when we meet they are just more obviously...themselves.  I have to say that holds true for me too.  Meeting Lecram was no different.  No surprises in his persona, just meeting a beloved old pal face-to-face for the first time.  It's great fun to finally be able to look someone in the eye, see mannerisms, hear a voice, and feel it all come together to finally flesh out a person fully and to realize it all adds up to everything you expected and more.  Starting out with a level of comfort and familiarity makes it so easy to dive in without any real hesitance.  Lecram is one of those deeply reflective people too so reading his blog for the past decade or more and having a strong sense of who he is made the ability to connect in person even easier.  The conversation flowed effortlessly, so much so I didn't realize we'd all be cleaned up around at the end of the evening and were those patrons...the ones who close a place down....until he pointed it out. 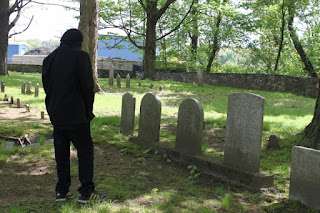 The next morning Lisa and Lecram returned for a tour of local cemeteries, because I am just that exciting a host and my hometown is just that thrilling a place that people are dying to come here. (Ba-dum-DUM)  Truth be told, Lecram and I share a certain affection for the peace and the craftsmanship and history cemeteries contain.  Not a lot of people dig that so of course we had to celebrate our strange attraction to them with a little tour. Here he was greeting the town's founding fathers. 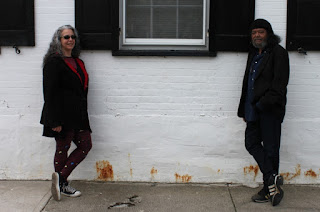 Lisa graciously provided paparazzi services upon request when we found a setting we liked either in the graveyards or between the three we visited. Yes, I took them to three different cemeteries in town.  Listen, if you want to go throw your money away at the casino, be my guest.  Lecram and I prefer dead people.  Don't judge. 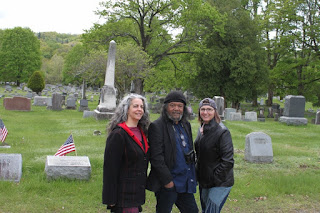 We got Lisa in on the action when we found a nice big headstone to use as a tripod....either that or it was one of the zombies we found lurking among the graves. (insert maniacal cackle here). She was such a great sport not only about bringing Lecram out to my neck of the woods but in staging some of our shots and she was a lovely person to meet as well, insightful, interesting, and open to wherever the ride took us. 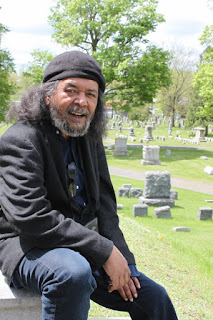 After a bit of discussion we agreed we share a preference for the very old, very simple headstones as opposed to the obelisks which seem to be demanding we pay attention to them.  I think they seem to say, "I'm dead but still potent!" Which seems a silly and futile argument when you're worm food. 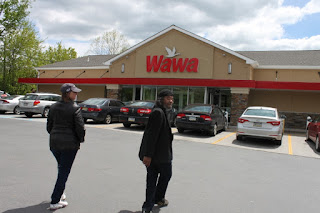 On the way back to the car I asked if they were familiar with the PA phenomenon that is Wawa?  They were not so I hipped them to it.  After having a yummy bit to eat at a far groovier local mom and pop establishment Wawa was anti-climactic at best but they could put a marker on their travelogue bingo card.  It's an important PA ritual.  Next visit (and I hope there is a next one, both here and on the west coast) we'll cover other important PA sites and rituals like fire hall wedding receptions. 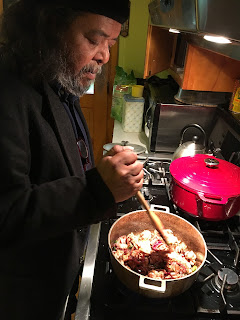 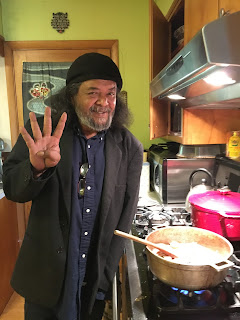 From there we hit the grocery store to get ingredients for a curry fest at Chez Lime.  After years of trading food posts and some private exchanges about food which got us both sweating like we'd just eaten a hot curry it was obvious this had to happen. Lecram prepared a Malay Hot Chili Curry #1 with four, count 'em, four serrano peppers. (Four is hot, but 5 or six is local hot) I was anxious to enjoy my first Malay curry. Lecram is an awesome cook and excellent guide to a new recipe and way of making a different kind of curry. It was a joy to be at his elbow as he showed me all the ways to make this authentic. And man did it smell and taste fabulous. I love me a good Trini or Indian curry.  I make and enjoy a Kenyan curry (more later).  I like Thai curry. I was delighted to taste Lecram's Malay curry, which was wonderfully distinctive from all the rest. 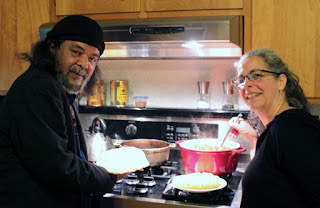 While Hot Chili Curry #1 sat on a back burner doing its thing it was time for me to get started on my pot. I made Kenyan curried venison because Lecram expressed a great longing for venison.  I actually learned this dish from a Kenyan friend about 20 years ago after she expressed a great longing for venison and I shared some of our bounty with her. I also fried up some roti and made Kenyan ugali to go with the stew.  A lovely bottle of Pinot Noir from Lecram complemented it all well. 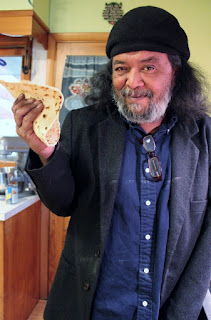 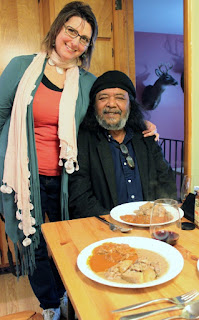 Lecram, Lisa, and I filled our bellies but for me at least I felt my heart and soul filling up.  With now adult children working on all different schedules and having their own busy social lives, and my new job (more about that later) often putting me on an opposite shift from Mr. Lime there are darn few family meals here any more and even less frequent are times in the kitchen with people I care about.  This day gave me the joy of sharing cooking time with a dear old friend and making a new friend.  I got to stand at  Lecram's elbow and learn his tips and tricks for making a proper Malay curry. I had a chance to prepare a couple dishes for some hungry pals who were anxious to enjoy them.  We all sat together trading stories, sipping wine, sopping up two different curry gravies with fresh roti and ugali.  (Oh and if there is any doubt, Malay curry and Kenyan curry go reeeeeeally well together even though the flavor profiles are noticeably different.  Super yum!) Sharing this culinary time made me realize how deeply I've missed having appreciative people to cook for and with.  It fed a long felt hunger to spend kitchen time with other people who derive joy from preparing and sharing food together. 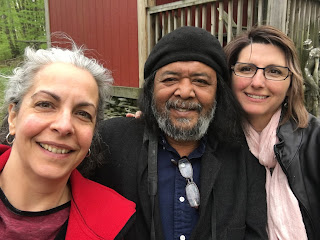 Every moment together felt like a special gift to me.  I shared how when I first stumbled across Lecram's blog I felt unworthy to even comment because I was so blown away by his creativity and talent, that when he "noticed" and commented warmly on my blog I felt as if the exalted artist had blessed me with some tiny bit of esteem.  We all had a good chuckle over that. Though I will always have tremendous admiration for Lecram's talent and ability to make things happen and sustain himself as he continues to produce works, over the years we became friends and this time just confirmed that.

Way back up in that picture where Lecram is holding up four fingers there is a plaque that hangs over the door in the background.  It hung over my grandmother's kitchen door and I claimed it when she passed.  It is the girl scout motto, "Make new friends but keep the old. One is silver.  The other, gold."  It was pure joy to finally meet my old friend face to face and to make a new friend in Lisa.  Our time together filled my soul, heart, and belly to bursting! Thank you, Marcel, for letting me know you'd be passing this way.  Thank you, Lisa, for being so graciously willing to chauffeur and stage shots.

As we chatted we spoke of the power of blogging to help us form connections all over the world and the greater depth and intimacy if promoted when compared to Facebook or Twitter.  It's been a long absence and I don't know how regularly I'll post here but it's good to be back.  I'm hoping to keep up with the old friends who also seem to miss the circles we had here, and who knows what new friends wait to be made...Well, there are some stories from 3-D life, we'll see if they make the blog...

Tis was a grand and delicious meeting indeed. Thank You once again for your warmth and hospitality.

Welcome back if briefly. Blogging is an art and should never be a chore. The food looks great and our WAWA is not exactly a tourist stop. You just made me think it would be fun to do a curry tasting. Have a half dozen regional curries and side dishes to add.

Good to see you out and about in blog-space again. I've missed you. . .

What?! I didn't know you two met, That is so awesome! Wowza!
I enjoyed meeting him and Renee in Fresno a few years back, two very lovely people.
Welcome back to blogland!
HI Lecram!

(not necessarily your) Uncle Skip said...

lecram, your visit was a gift to me! hosting you was pure delight.

tabor, thanks. life got out of control there for a bit. i won't be posting daily but i hope to get back to something sort of regular at least.

Welcome back. It's always great to meet up with good friends. Thanks for the nudge. :)

Thanks for the heads up. I believe this is where a lot of our friendships started from. I'm a bit rusty and have some fixing up to do on my blog page.

Hello!!!!
It is so good to hear from you again. You look fantastic. And I'm so glad to hear that life is 99% good. Can't complain about that! You sound very busy but very happy. Can't wait to hear more!

Having had the distinct pleasure of meeting up with you more than once, I can certainly attest to the part about such meetings being just a further fleshing out of the friend made via blogging. It sounds like you had a wonderful time. Next time we get together, we'll have to do a cemetery or two, also.

Jillie, go for it!

Kat, aww thanks! Busy but happy is about right.

Suldog, I look forward to seeing you and YOUR WIFE again! You're an important part of any NE visit.

Sounds like a really wonderful visit you guys had.

Agent, we truly had a great time! Thanks 😊

Great to see you Back! Glad everything is going good.

Beach bum, Great to see you too! thanks :)

I am sooooooo glad you're back

It's always great to meet up with good friends. Thanks for the nudge. :)

Beautiful image the building You chose well for the theme.
เว็บ แทง บอล