Slice of Lime-The Seeds of Madness 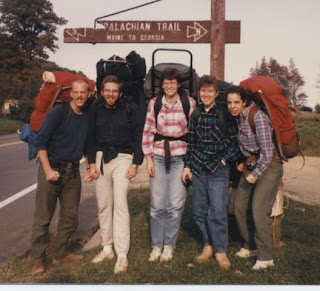 (Yeah check out the crazy bookends in this picture.  Those lunatics married and procreated.)
Mr. Lime and I got married in the middle of my junior year in college........the day after fall semester finals. We wanted to have time for a honeymoon during the semester break and did not want to wait until May.

During finals week I became a raving lunatic. I know that must come as a terrible shock to all of you.  Every time I tried to study I'd think about wedding plans. Every time I'd try to check up on last minute details I'd think how I should be studying.  Consequently nothing was being accomplished in either area.  I did manage to scratch my newly blossomed, stress-induced eczema into a weeping, raw mess though.  The upside was that my skin would now match the red dresses I'd chosen for my bridesmaids.

My darling husband-to-be came to my apartment one night and found me in a wild frenzy. He said I should put away the books and planners, make some tea, put my feet up and he'd go rent us a movie so I could unwind. He asked what I wanted. I kissed him gratefully and said a light, fluffy comedy sounded just about right. He repeated his instructions that I relax while he went out to get the movie. I exhaled a blissfully contented sigh as I mused over what a thoughtful man I would have the joy of spending my life with.

He came back a little while later and popped a movie into the VCR. What light, fluffy comedy did he rent to alleviate me tension and anxiety? The Killing Fields about the Khmer Rouge led genocide in Cambodia.

At the end of the movie I sat there nearly catatonic. Mr. Lime asked what was wrong.  I burst out crying hysterically. He looked at me like I had three heads. I wondered between sobs how he thought this was supposed to make me feel less stress. He thought if I saw someone whose problems were worse than mine I'd feel better about my own situation. In between sobs I cried, "No! Now I just have guilt about the suffering of these people on top of my own stress!  How can I savor any joy knowing about all the horror these people are enduring?!"

This weekend we will pass the 22 year mark.  If we decide to go see a movie to celebrate he at least knows the definition of a light, fluffy comedy now.
Posted by lime at 11:17 PM

Labels: mr. lime, they can be taught

Poor you.. and poor Mr. Lime. Too funny though. Congrats on 22 years together. Go for fluff. :)

He looked at me like I had three heads.

Been there, done that, on a regular basis at my own house and have the t-shirt. Seriously, Congrats and many happy more.

Congratulations Lime! Wow, 22 years...that's a lot of time to learn what light fluffy comedy is. And that picture is just fantastic! :D

I have one year on you. Congrats for making it this far. And for teaching Mr. Lime the meaning of a fluffy comedy.

That's funny. My ex still lends me movies he thinks I'll like - after all these years he knows my tastes.

Congratulations on 22. We have made only 11 so far. Even so, we like the line from Fawlty Towers:

How long have you been married?

Perhaps you should rent Swimming To Cambodia this weekend, similar theme, different interpretation. R.I.P. Spalding Gray, one of my favorites.

Reminds me of the time Jen & I took 1F & 2F to see Jurassic Park (the girls were 11 and 8, respectively, at the time). You know, cute dinosaurs, and all that. . . It took me a while to understand why 2F was clutching to my pantleg for the next, oh, 3 days afterward. . .

For us, there was a huge difference from 20 to 25; lots of 'testers' in those five years, of the 'what-doesn't-kill-you-makes-you-stronger' variety. . .

Happy (upcoming) Anniversary! MY WIFE and I will be celebrating our 19th next year (which will actually be our 4.75th, since we were married on Leap Day, but I digress.)

Light, fluffy comedy? MY WIFE suggests "Boeing, Boeing", with Tony Curtis and Jerry Lewis. Of course, it's probably her favorite movie, so she suggests that all the time. I'll go with any of the "Carry On" series of British comedies. Not only do you get laughs, you also get titillated (which only hurts for a little while, or so I'm told.)

How is it I got married at 28 and you married in college yet I have been married one year longer than you?

I just cant get the math right, something is terriby wrong here!

And I wish I had a suitable 'pre-courtship' photo of Jen and me together, that was even half as good as what you've posted here, but alas. . .

no there's light and fluffy...

Aha. This is reason #72 why I am single. That would have pissed me off big time.

I dumped a guy for bringing over a serious foreign film when I wanted light and fluffy. It was only the 2 or 3rd date. I was in college and stressed and asked for something light. He brought over serious(which on any other nite would have been fine). Figured his listening skills would not improve, so let him go. Turned out to be a good call. He had a GF who he lived with but had not mentioned.

***
But really, what I get from this story is that Mr Lime cares about people. He is a good man. Sounds like a keeper.

****
Oh and ps...have u ever seen
Swimming to Cambodia? It is a monologue by Spalding Gray who had a part in the movie. It is an intersting movie. not light and fluffy but not as depressing as the actual KF movie.

And I can't imagine planning a wedding and going through finals at once. You were a brave woman!

It takes a while, but they can be trained... Happy Anniversary! :-)

My daughter's roommate is getting married in May.....and is driving her insane!

This story kind of makes its own points, dunnit? Congratulations on the long haul, Girl!

How sweet, Michelle- what a nice memory of how it all began :-)

Oh my!! That was awful!! Poor Mr. Lime didn't have a clue did he? Ha!
Glad he does now!
Congrats on your POTW award!!
Merry Christmas
Hugs
SueAnn

Congrats on surviving the 'getting to know you' part early marriage. Funny. Also congrats on your POTW.

Your man sounds just like mine. He really misses the mark sometimes. Without even trying.

Out on the prairie said...

The day before I was married, my soon to be partner brought some things over to put in my attic.Most of the attic had flooring, but there was a few areas you didn't want to step on and she found it. While reading my paper and sipping a coffee and crash came and an entire leg dangled through a hole in my ceiling. "Didn't I just say, watch your step?"I humbly replied.

Linda at To Behold The Beauty said...

A funny story. Isn't it fun to look back on those early days? Congratulations on your anniversary and on the POTW. I'm curious, though...did you hike the entire length of the Appalachian Trail?

God bless men and women and the differences among them. Congrats on the 22 years!